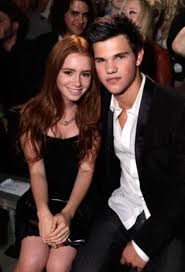 Although actress I've never heard of, (and daughter of Phil Collins) Lily Collins and Twilight star, Taylor Lautner, have never actually admitted to being in a relationship with each other,  they have reportedly broken up just one week in advance of their film’s premier, Abduction.  Us Weekly reported that it was a “clean break that Taylor initiated.” Ouch, clean break. Here's hoping their promotional and party tour for the movie isn't too awkward.  Do you think she could feel the breakup "Coming in the Air Tonight?" Come on! That was too easy!  I thought those kids were gonna make it.

Thanks to my ridiculously vigilant Senior Actress - Wolf Boy Correspondent in NJ.

And on another note, a VERY HAPPY ANNIVERSARY to my best friend and amazing husband and Dad....we will not be appearing on this blog EVER I tells ya!
Posted by Nancy Falkow - Mc Bride at 1:40 AM 1 comment: Links to this post

And Don't Call Me Shirley...

I have to admit, they're my favourite of the Teen Mom couples, Amber Portwood and poor ol' Gary Shirley, have really, truly split up for good like.  He took to Twitter to complain, here's a few:

I really thought those actual kids were gonna make it, again.
Posted by Nancy Falkow - Mc Bride at 7:35 AM 2 comments: Links to this post 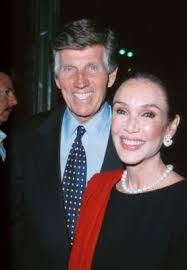 TV's Gary Collins, and his wife (former Miss America) Mary Ann Mobley, have filed for legal separation, all while she's going through chemo! For her to file amid this, he must be REALLY drunk! Gary's been stung for DUI (3 times!) and leaving a restaurant without paying this past year, so me thinks he's got some personal shit to work out. I really thought those kids were gonna make it.

Thanks to my supersonic Senior Actor-Pageant Winner Correspondent in NJ for the overnight news tip.
Posted by Nancy Falkow - Mc Bride at 4:52 AM 2 comments: Links to this post

She has the EX Factor...

Well, after reports that Simon Cowell's fiancee, Mezhgan Hussainy, had moved into one of his other LA properties (also known as the "Girlfriend's Graveyard,") it is official the pair have called it a day.  She apparently didn't get on with Simon's Mommy and she got to keep the ring and a lifetime supply of tight V-neck short sleeved shirts.  He's already dating a mystery British brunette.  I really thought those kids were gonna make it.

Posted by Nancy Falkow - Mc Bride at 8:32 AM 3 comments: Links to this post

Well, I don't report the "back togethers" but I'm here to tell you AGAIN that Cameron Diaz and Alex Rodriguez are back in splitsville. OK? I don't want to see them again on my blog dammit! But I did think those kids were gonna make it.

Also, here's a weird one. Remember that couple, Michaele and Tareq Salahi, that "snuck" into that White House state dinner and got a failed reality series (Real Housewives of DC?) Well he apparently reported her missing, when she had actually left her husband (willingly) and went on tour with Journey's Neil Schon. That's a reality show I'd actually watch!  Ouch!  I thought those kids were gonna make it.


I'd like to thank my Senior Reality TV Runaway Correspondent in Maryland for this late breaking news tip!
Posted by Nancy Falkow - Mc Bride at 5:27 AM 5 comments: Links to this post Well, a few weeks ago Sara Gilbert, (you know, Darlene from the show, Roseanne) and TV producer/writer-partner-of-10 years, Allison Adler, have split amicably.  I have no idea how I missed this one! The only thing I can think of is, the tabs were flooded with updates on Little House on the Prairie's Melissa Gilbert and Bruce Boxleitner's divorce being filed the same day as this late breaking news. What the hell? I really thought those gals were gonna make it!
Posted by Nancy Falkow - Mc Bride at 11:48 AM 2 comments: Links to this post 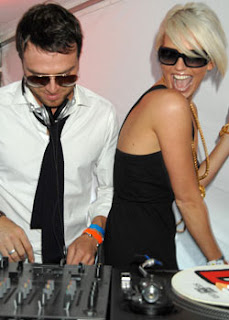 Girls Aloud "singer" Sarah Harding and DJ Tom Crane have split up. She spent the summer "working" in England while he was in Ibiza and apparently this put a strain on their 4 year relationship.  This is very important information that we should all memorize for tomorrow's exam. I really thought those kids were gonna make it.