Did you know Katy Perry was dating John Mayer and his late 90's Soul Asylum hairdo? I sho' didn't! (Why did I think she was dating a different guitar player?) Anyways, they're history. I really thought those kids, neither of which clearly need any more media attention, were gonna make it.
Posted by Nancy Falkow - Mc Bride at 6:33 AM 1 comment:

No More Sex in the West Wing... Ok first of all, I had no idea these two were even an item, but breaking news -- Kristin Davis has split from Aaron Sorkin because of their busy lives. They'd only been dating since May but I really thought those kids were gonna make it. And all I really have to say directly to Kristin (cause you KNOW celebrities come here first for their own break-up confirmation) is dayum girl you look good at 47.

Back from our summer hols to report some break-up news, here we go... 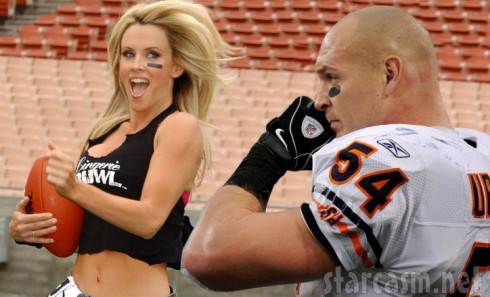 Pretty, funny and seemingly eternally single, Jenny McCarthy and Chicago Bears linebacker, Brian Urlacher have split. Who's up next for m'lady? We'll see them here soon I guess. I really thought those boobs were gonna make it.

So after I googled who these people were, I was able to write this laughless paragraph.  Evelyn Lozada and Chad "Ochocinco" Johnson are now ovah (41 days after they were married, take that Kim K!) She is the star of "Basketball Wives," and Imma assume he's a basketball player. Ok, I'm back again from google, he's a football player. So why is she the star of Basketball Wives? I've run out of time to spend on this entry. So let's just say a couple of sports related pretty people have ended their relationship.  I really thought those kids were gonna make it
Thanks to my tireless Senior Reality-Sports-Related-Break-Ups Correspondent in STL for the tip.

In other pretty-people-sports-related break-up news, actress Willa Ford and former hockey player Mike Modano have filed for divorce after 5 years of marriage and no high-sticking.  I really thought those fit kids were gonna make it.

And OH! I missed one! Celebrity big brother of  newly engaged Miley, Trace Cyrus, has split from actress Brenda Song (The Social Network) after 2 years of dating bliss.  I really thought those some-what-bodies were gonna make it.

Posted by Nancy Falkow - Mc Bride at 3:58 PM No comments:

Stevie Wonder (62) has signed, sealed and delivered his divorce papers from his fashion designer wife Kai Millard Morris (who he had been living separately from since 2009).  Even a blind man could see this would end up in ebony and alimony. I really thought those kids were gonna make it.

Ex-Poison front man Bret Michaels (49) has ended his 16-year relationship with his baby mama Kristi Gibson. It took him that long to realize she was the thorn.  I really thought those kids were gonna make it.

Thanks to my diligent Senior Hair Band Correspondent in Delgany, who revealed that Michaels went to her rival high school back in PA and Poison played her roller rink, that my friend is reporting.

Daughter of Whitney Houston, Bobbi Kristina, and "adopted" brother Nick Gordon have called off their engagement, although it is reported that they are still living together, so we're on alert here people. Say a little prayer for these kids.

Posted by Nancy Falkow - Mc Bride at 3:03 PM No comments: