Two-fer Tuesday...Wake Him Up Before He Go-Go's

What a day, say it ain't so people! Will Smith and Jada Pinkett Smith have called it quits after 13 years AND George Michael and long-time partner Kenny Goss (who've been together since 1996!) have also split up. While Will and Jada chose In Touch Magazine to make their news public, George himself told the crowd from the stage of Prague State Opera. I really thought all those kids were gonna make it. 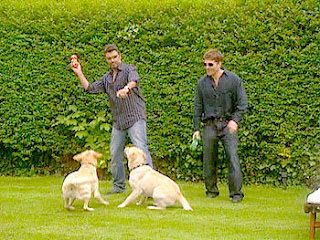 Thanks to my Senior Open-Marriage Scientologist Correspondent in Philadelphia for the early news tip!

UPDATE: I usually don't post updates when people get back together, we just wait to write their 2nd break-up post...however, TMZ (and my Senior Fresh Prince Reconciliation Correspondent in Las Vegas) has informed us all that the Pinkett-Smiths have responded to the rumours, and that they are just rumours and in fact still together. We're waiting kids, we're waiting.
Posted by Nancy Falkow - Mc Bride at 7:45 AM